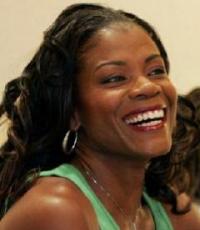 She was a key member of four WNBA Championship teams with the Houston Comets; She is widely regarded as one of the best female basketball players ever
Fee Range: $10,000 - $20,000
Secure Sheryl Swoopes
for Your Event

Sheryl became the first women's basketball player to have a Nike shoe named after her: the "Air Swoopes". In 1993 Swoopes won the NCAA women's basketball title with Texas Tech during her senior season. Her jersey was retired by the school the following year.

Swoopes's contributions to women's basketball as well as her tough play through injury have her generally considered to be one of the best female basketball players of all time. Swoopes is the second player in WNBA history to win both the regular season MVP award and the All-Star Game MVP award in the same season. The first player to accomplish this was Lisa Leslie. Swoopes is also the first to record a playoff triple-double in WNBA history.

In March of 2008, Swoopes signed with the Seattle Storm, ending her eleven year career with the Comets. Swoopes sat out the 2010 season, but an annoucement from the Tulsa Shock in 2011 affirmed her comeback in the WNBA.

Secure Sheryl Swoopes for Your Event

Based on your interest in Sheryl Swoopes as a speaker or for a personal appearance, Direct Sportslink has provided you additional links below for other sports talent with similar appearance fees, speaker topics, and categories that match Sheryl Swoopes.