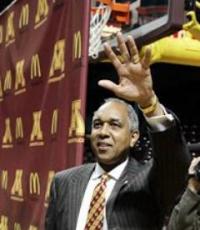 He coached the University of Kentucky NCAA Men's Basketball Championship team in 1998
Fee Range: $10,000 - $20,000
Secure Tubby Smith
for Your Event

From 1991 to 1995, Smith led Tulsa to a 79-43 record. Rebuilding the basketball program his first two years, he then led the team to two consecutive Missouri Valley Conference regular season titles and two appearances in the Sweet 16 of the NCAA Men's Division I Basketball Tournament in 1994 an 1995. At Georgia, he led the Bulldogs to a 45-19 record in his two years from 1995 to 1997. His teams achieved a Sweet 16 finish in 1996 and lost in the first round of the NCAA tournament in 1997.

In his first season at UK (1998) , he coached the Wildcats to their seventh NCAA Men's Division I Basketball Championship. Coach Smith was the recipient of the Jim Phelan National Coach of the Year Award for 2005.

Secure Tubby Smith for Your Event

Based on your interest in Tubby Smith as a speaker or for a personal appearance, Direct Sportslink has provided you additional links below for other sports talent with similar appearance fees, speaker topics, and categories that match Tubby Smith.