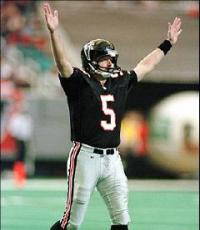 He is one of the greatest placekickers in the history of the NFL
Fee Range: $5,000 - $10,000
Secure Morten Andersen
for Your Event

Morten Andersen has enjoyed a long career as one of the NFL's most prolific kickers. At the age of 46, he was the oldest player in the NFL, and was actually a year older than Falcons head coach Jim L. Mora.

Though born in Copenhagen, Andersen was raised in the west Jutland town of Struer, Denmark. As a student, he was a gymnast and a long jumper, and barely missed becoming a member of the Danish junior national soccer team. He visited the United States in 1977 as an exchange student. He first kicked an American football on a whim at Ben Davis High School in Indianapolis. He was so impressive in his one season of high school football that he was given a scholarship to Michigan State University.

Andersen starred at Michigan State setting several records, including a Big-10 record 63-yard field goal against Ohio State University. He was named an All American in 1981. His success landed him the kicking job with the New Orleans Saints, who drafted him in the 4th round with the 86th overall pick.

Andersen quickly emerged as one of the strongest and most reliable placekickers in the NFL. In his years with the Saints, he was named to six Pro Bowls, kicked 302 field goals, and scored 1318 points. In 1991, against Chicago, Andersen kicked a 60-yard field goal, tying him with Steve Cox for the second-longest field goal in league history, behind the 63-yard record-holder kicked by Tom Dempsey. (Andersen's kick has since been surpassed by Jason Elam, who tied the 63-yard mark, and Matt Bryant, who kicked a 62-yarder.) Andersen's proficiency with field goal kicking earned him the nickname "Mr. Automatic." Following the 1994 season, he was released by the Saints for salary cap purposes and because his accuracy had started to decline.

Following his release by the Saints, Andersen signed with the Atlanta Falcons. He silenced those who felt him to be washed up and was once again named a Pro Bowler during his time in Atlanta. In December 1995, he became the first player in League history to kick three field goals of over 50 yards in a single game, against the Saints in Atlanta. As a Falcon, he made franchise history by kicking the game-winning field goal in overtime in the 1998 NFC Championship Game to beat the Minnesota Vikings and send the team to its first-ever Super Bowl appearance.

He went on to play with the New York Giants for the 2001 season, followed by the Kansas City Chiefs the following two seasons. In the 2004 offseason, Andersen was beaten out for the kicking job by rookie Lawrence Tynes. He was released by the Chiefs for the final roster cutdown and was subsequently signed by the Vikings. Although his leg strength had declined greatly with age, he continued to prove himself accurate for field goals. Having not been signed by a team following the 2004 season, he became a free agent and did not play in 2005. He announced NFL Europe games in the 2006 season.

On September 19, 2006, ESPN reported that Andersen, 46 years old at the time, signed with the Atlanta Falcons. In his second game back with Atlanta, on October 1, 2006, Andersen made all 5 of his attempted field goals, as well as both extra point attempts, reaching a total of 17 points in the game and matching his career best with 5 field goals in a game for the ninth time in his career. That week, he was named NFC special teams player of the week, becoming the oldest player to earn the honor since the award was first introduced in 1984.

Secure Morten Andersen for Your Event

Based on your interest in Morten Andersen as a speaker or for a personal appearance, Direct Sportslink has provided you additional links below for other sports talent with similar appearance fees, speaker topics, and categories that match Morten Andersen.