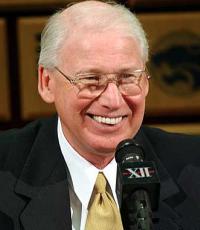 He has won the Big Eight Conference Coach of the Year multiple times
Fee Range: Contact Us
Secure Bill Snyder
for Your Event

Bill Snyder made his collegiate football coaching breakthrough when he was hired at Kansas State University in 1989. K-State had previously had a 299-510 record in 93 years of play, and in Snyder’s first season he won their first game in three seasons.  By Snyder’s third season K-State had a winning record for the second time since 1970.

In 1993, Snyder led the team to the school’s second bowl game, the 1993 Copper Bowl, and their first-ever bowl win. The Copper Bowl was the first of 11 consecutive bowl games that Snyder would take his team too, winning six of them.

In 1996, Snyder led his team to its first Big 12 Conference football game where they won against Texas Tech. Two seasons later in 1998 he would lead K-State to an undefeated season and it’s first ever number 1 ranking in the national poll. In 2003 K-State won the Big 12 Championship beating the #1 ranked team.

In 2005, Snyder announced his retirement as head coach, and in return K-State renamed the stadium “Bill Snyder Family Football Stadium”. In 2008, Snyder was named to a second term as head football coach at K-State, earning his 150th win just 3 years later.

Secure Bill Snyder for Your Event

Based on your interest in Bill Snyder as a speaker or for a personal appearance, Direct Sportslink has provided you additional links below for other sports talent with similar appearance fees, speaker topics, and categories that match Bill Snyder.