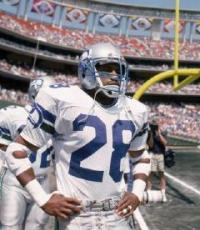 He was a key member of the 1982 National Championship football team at Penn State University; He was a three-time Pro Bowl selection during his eight year NFL career
Fee Range: $5,000 - $10,000
Secure Curt Warner
for Your Event

Curt Warner is a former college football star at Penn State University who spent eight seasons in the NFL where he was a three-time Pro Bowl selection.

Warner helped his high school football team to several state championship games. He was a multisport athlete, perhaps excelling in baseball more than football. He was predicted as an early first-round draft pick out of high school but was convinced by coach Joe Paterno of Penn State to play college football rather than play professional baseball. After a brilliant senior season on Penn State's 1982 National Championship team, Warner blazed a trail of his own through the NFL in 1983.

Warner was selected in the first round by the Seattle Seahawks. He led the AFC in rushing yards his rookie season, helping his team to the franchise's first Conference Championship game which they lost to the Los Angeles Raiders. The following year Warner suffered a torn ACL in the season opener against Cleveland and was sidelined for the rest of the year. He came back in 1985 and had a number of successful seasons before ending his career with the Los Angeles Rams.

Since his retirement, Warner has owned a car dealership and has been a high school running backs coach. He has also been the founder and president of the Curt Warner Autism Foundation.

Secure Curt Warner for Your Event

Based on your interest in Curt Warner as a speaker or for a personal appearance, Direct Sportslink has provided you additional links below for other sports talent with similar appearance fees, speaker topics, and categories that match Curt Warner.