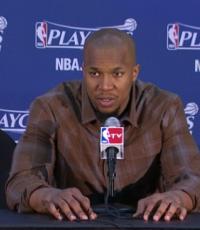 West attended and graduated from Xavier University in Cincinnati, Ohio. There, he was a four-year starter on the basketball team. West was the first XU player to get his number retired while still playing for the Musketeers, during which he led Xavier to a top 10 national ranking and a #3 seed in the NCAA Tournament. West was named as a first-team All-American his senior year and the 2003 Associated Press and United States Basketball Writers Association National Player of the Year. During college, he was a three time A10 Conference Player of the Year.

West was drafted by the New Orleans Hornets in the first round, eighteenth overall in the 2003 NBA Draft. He was selected to his first NBA All-Star Game in 2007-2008. The next year, West repeated as an all-star. In 2011, he tore his ACL and became a free agent. In December of the same year, he agreed to play for the Indiana Pacers.

Secure David West for Your Event

Based on your interest in David West as a speaker or for a personal appearance, Direct Sportslink has provided you additional links below for other sports talent with similar appearance fees, speaker topics, and categories that match David West.