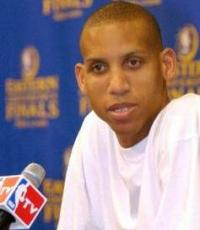 He is a member of the Naismith Memorial Basketball Hall of Fame; He is one of the best three-point shooters in NBA history
Fee Range: $30,000 - $40,000
Secure Reggie Miller
for Your Event

Reggie is a former NBA star well known for his precision in three-point field goal shooting, especially in clutch situations. At the time of his retirement he held the NBA 3-point field goal record, with 2,560 career 3-pointers.

Reggie attended UCLA and was selected by the Indiana Pacers with the 11th pick in the 1st round of the 1988 NBA Draft, where he remained until his retirement in 2005.

On April 11, 2005 in a game versus the Toronto Raptors Miller passed Jerry West to move into 12th on the NBA's all time scoring list. His #31 is retired by the Indiana Pacers.

Reggie was a member of the gold medal-winning Olympic men's basketball team in 1996.

Miller was also selected for the Pacers' 40th anniversary team in 2007. After his retirement, he has worked as a NBA analyst. He is a member of the Naismith Memorial Basketball Hall of Fame.

Secure Reggie Miller for Your Event

Based on your interest in Reggie Miller as a speaker or for a personal appearance, Direct Sportslink has provided you additional links below for other sports talent with similar appearance fees, speaker topics, and categories that match Reggie Miller.