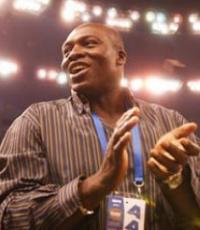 He retired as the NFL's all-time sack leader; He led the Buffalo Bills to four Super Bowls; He is a member of the Pro Football Hall of Fame
Fee Range: $10,000 - $20,000
Secure Bruce Smith
for Your Event

Bruce Smith attended Virginia Tech and was drafted by the Buffalo Bills as the number one draft pick overall in the 1985 NFL Draft. Smith became known as a sack specialist, with 15 in 1986 and a personal season-best 19 in 1990. By 1989, Smith had already become the Bills' all-time sack leader when he reached his 52nd sack. In 1990, his defensive performance helped bring the Bills to Super Bowl XXV, but they eventually lost to the New York Giants.

After the 1999 season, Smith signed with the Washington Redskins as a free agent. In his first season, he posted 58 tackles and 10 sacks. He pressed onward in pursuit of Reggie White's all-time sacks record (198), which he finally passed in the thirteenth game of his nineteenth season in 2003. Smith finished the season with 200 career sacks and at the time of his retirment, he held the NFL record for most career quarterback sacks.

In 2006, Smith was voted into the College Football Hall of Fame. Since football he has worked as a large-scale hotel designer and has been part of Legends Energy Group, which promotes energy programs across North America.

Secure Bruce Smith for Your Event

Based on your interest in Bruce Smith as a speaker or for a personal appearance, Direct Sportslink has provided you additional links below for other sports talent with similar appearance fees, speaker topics, and categories that match Bruce Smith.